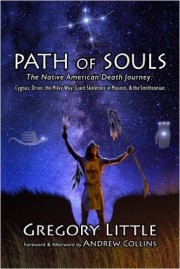 The 2,200 year old Native American Indian earthworks at Portsmouth were used to propel the souls of the dead to the stars. America's ancient Mound Builders used the mound and earthworks locations to gain access to the Path of Souls.

Portsmouth, Ohio, January 13, 2016 (Newswire.com) - Within a small park on a hill in modern Portsmouth, Ohio is the focal point of an ancient complex of mounds and earthworks attributed to the Hopewell, a Native American mound building culture that inhabited the region around 200 B.C.E. Some 2,200-years-ago the Hopewell constructed an incredible, massive complex of walkways, horseshoe-shaped embankments, mounds, and enclosures at Portsmouth that nearly defy description. The walkways, a uniform 160-feet wide, were outlined by parallel walls of earth some 3 to 5 feet in height. The walkways ran for over 14 miles connecting the Portsmouth site with at least two other sites located on the other side of the Ohio River in Kentucky. The complex has been an enigma since its discovery several hundred years ago and archaeologists have simply asserted that it was used in mysterious ceremonies and rituals. It is known to be a major sacred site for the Native American culture. However, research has now revealed its probable purpose.

The central site in Portsmouth was highlighted by two large horseshoe-shaped earthworks along with adjacent circular earthworks and mounds. These U-shaped embankments were formed by walls of earth some 12-15 feet high. (Only one horseshoe embankment remains today.) From this main site in Portsmouth, a graded walkway extended 5.5 miles to the southeast ending at the Ohio River. It then continued for 1.5 miles on the Kentucky side leading to a multi-ringed circular enclosure with a large mound in the center. Another graded walkway ran to the southwest for 7 miles leading to the Ohio River. On the other side of the river, in Kentucky, a massive earthen square enclosure was located. Extending from this square formation were several parallel walls of earth running for 2100 feet forming unusual rectangular enclosures. Previous research by Dr. Greg Little, author of the Illustrated Encyclopedia of Native American Mounds & Earthworks, has shown that from the elevated formations in Portsmouth, the Winter Solstice sunrise and sunsets were aligned to the circular formation and square enclosure in Kentucky. Both the sunrise and sunset on the solstice were seen on the horizons directly above these earthen formations.

...the entire site was essentially seen as a gigantic earthen magic machine that was seen as a way to reach the sky world.

Since the mid-2000s it has been known that the mound building cultures of ancient America utilized mounds and earthworks for a ritualistic ceremony to assist departed souls to pass from the Earth to the stars where a journey to the place of origin was made. The journey was called the Path of Souls. It entailed a winter ritual where the soul initially leaped to the sky, initially aiming at Orion's Nebula. From that arrival point in the stars, the soul journeyed through the underworld and then transitioned to the Milky Way. The Native American mound builders saw the stars of the Milky Way as souls making the journey. The next night the soul started its journey along the edge of the Milky Way to the Cygnus Constellation, located in the northwest sky. Cygnus was seen as a large bird and the constellation is located at the Dark Rift of the Milky Way. The Dark Rift was referred to as a "split in the path" by the ancient Native Americans. It was here that the soul was finally judged and, if the tests were passed, the soul was believed to move through a portal leading out of the sky world to the origin of all souls. The portal was believed to be the star Deneb, the brightest star of Cygnus.The journey could only be made at a time when the constellation of Scorpius was not visible and also when Orion was setting on the western horizon just before dawn. Scorpius was seen as the ruler of the underworld and it was important that it not be in the sky when the journey was begun. A video of the Path of Souls explains the ideas behind the beliefs.

Working with a computer stellar program, Little calculated the arrangements of the key stars involved with the Path of Souls journey as they were present in Portsmouth in 200 B.C.E, when the site was actively used by the Hopewell. Since the alignments of the Winter Solstice were already verified at the site, the date of December 21, 200 B.C.E. was the test time frame.

The results showed that on the Winter Solstice in 200 B.C.E., Scorpius was below the horizon throughout the night and was not visible. It was also found that when viewed from the circular enclosure in Kentucky, Cygnus was seen to set in the northwest horizon at nightfall directly above the main complex elevated on the hillside in Portsmouth. At the same time, viewed from the main complex in Portsmouth, the constellation of Orion was seen to rise in the sky in southeast directly above the circular earthworks in Kentucky. Later in the early morning, before sunrise, viewed from the main complex in Portsmouth, Orion was seen to fall on the horizon to the southwest, directly above the square earthworks in Kentucky. The leap of the soul to Orion was made just as Orion reached the western horizon in the early morning.

All of the key elements in the Path of Souls death journey are present in the Portsmouth earthworks, and it seems likely that the entire site was essentially utilized as a gigantic earthen magic machine that was seen as a way to reach the sky world. The journey was begun at the circular earthworks in Kentucky at nightfall, and those participating would move through the walkway to the Ohio River where they would cross to the other side where the path continued uphill to the main site in Portsmouth. From there, the ceremony involved the movement of the participants to the southwest following the path to the river and then crossing into Kentucky. There, at the square enclosure, the final rituals would take place, culminating in a movement through the square and the long, rectangular embankments.