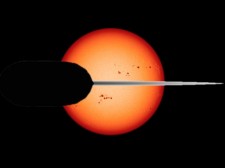 London, England, June 9, 2017 (Newswire.com) - The weirdest star in the galaxy just got even weirder. KIC 8462852, otherwise known as Tabby’s Star after its finder, astronomer Tabetha Boyajian, could be broadcasting a message to inhabitants on earth.

A new astrophysics paper published by viXra, authored by science writer Andrew Collins and chartered engineer Rodney Hale, states that a 0.88-day light fluctuation recorded in connection with the star synchronizes with a larger cycle of 48.4 days in a manner that coincides with the Earth’s own solar calendar every 242 days. The authors — who show that the objects causing the light dips were most likely giant ellipses, disks or rotating shards of unknown origin — note also that these number patterns are all exact multiples of 11, a prime number.

"French astronomer Luc Arnold as far back as 2005 wrote that space telescopes like Kepler might well see what he called attention-grabbing signals from alien civilizations ... Even though this might all be coincidence, this is exactly what we are seeing in connection with the data coming from Tabby's Star — mathematical patterns that have meaning to us down here on earth."

“French astronomer Luc Arnold as far back as 2005 wrote that space telescopes like Kepler might well see what he called attention-grabbing signals from alien civilizations,” Collins said. “Arnold wrote that these might take the form of mathematical patterns, including prime numbers or binary code, recorded in the light curves created by giant artificial objects made to pass in front of stars for this express purpose.”

“Even though this might all be coincidence, this is exactly what we are seeing in connection with the data coming from Tabby’s Star — mathematical patterns that have meaning to us down here on earth,” Collins added.

KIC 8462852 first made the headlines in October 2015 when it was reported that incoming data from the four-year Kepler space mission between 2009 and 2013 showed that the star’s light emissions were fluctuating in a highly erratic manner. On one occasion the star’s light dipped by 16 percent and on another by 22 percent. Astronomer Tabetha S. Boyajian of Louisiana State University was given the job of trying to make sense of the Kepler data relating to the star.

In a paper published in 2015, she concluded that the mysterious light dips were caused by a swarm of comets in an eccentric orbit around the star. Her colleague Jason Wright, an astronomer and astrophysicist with Penn State University, had another possible solution. Tabby’s Star’s unusual light dips were perhaps consistent, Wright related, with a “swarm of megastructures” orbiting around the star, this being a reference to a so-called Dyson sphere first conceived of by theoretical physicist Freeman Dyson in 1960. In an interview with The Atlantic, Wright further added that: “Aliens should always be the very last hypothesis you consider, but this looked like something you would expect an alien civilization to build.”

In 2016 Dr. Bradley Schaefer, a professor of astronomy and astrophysics at Louisiana State University, determined from a detailed eyeball examination of photographic plates from the DASCH-Harvard collection that Tabby’s Star, which lies 1,300 light-years away in the constellation of Cygnus, had faded by as much as 20 percent between 1890 and 1989. A further examination of the Kepler data for the star by astronomers Benjamin Montet and Joshua Simon showed that Tabby’s Star faded by around 3 percent across the four-year Kepler mission, supporting the idea of a long-term dimming trend, which is likely to be connected with the star’s short-term dimming events.

Why exactly the star should be dimming in this manner remains a complete mystery. But now it appears that Tabby’s Star is doing something even weirder. New findings from a British team indicate its periodic light fluctuations might contain numerical patterns aimed at life on earth. Science fiction writer and futurist John Michael Godier, in his latest video update on Tabby's Star, admits the numbers encoded in the light fluctuations are probably just coincidence, but if these fluctuations aren't a coincidence, the implications are profound. “It would imply that an alien civilization over 1,300 light years away knows that Earth is habitable, has the right atmosphere in the mix for intelligent life to develop, have calculated our orbit and are sending a visual message to us just in case we're here,” Godier stated.

Sending messages encoded in light fluctuations is not all that different from the idea of an alien civilization beaming a radio signal towards us, something that SETI has been searching for to confirm the existence of intelligent life in the galaxy. “I really think it's just the star rotating and it's all coincidence,” Godier affirmed, “but it's interesting nonetheless, and a bit creepy. What a weird star."

The first author of the new article examining the numbers encoded in the light fluctuations from Tabby's Star, Andrew Collins, can be contacted here.