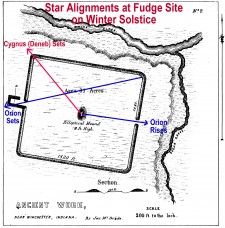 The ancient Hopewell earthworks at Indiana's Fudge Site show all the key stellar and solar alignments associated with the Path of Souls death rituals.

Winchester, Indiana, August 2, 2016 (Newswire.com) - ​​​Hopewell earthworks and mounds are some of the most intriguing and mysterious geometric formations created in the ancient world. “Hopewell” refers to a Native American mound-building era that developed from the earlier Adena culture, with both names derived from excavated mound sites on historic plantations. Adena and Hopewell spanned the approximate time frame of 1500 BC to AD 900 and were gradually replaced by another mound culture called “Mississippian.” Archaeological research the past few years has shown that many ancient Native American mound/earthwork sites were constructed in a way that facilitated a death ritual that would lead deceased souls to the stars. This “Path of Souls” ritual took place on the Winter Solstice and involved Orion’s Nebula and the Cygnus Constellation. The key alignments for the death ritual on the Winter Solstice were the sunset, the setting point of Cygnus (specifically the star Deneb), and the rising and setting points of Orion’s Nebula.

On the night of the Winter Solstice a series of star alignments were viewed. These alignments were typically made from the top of a prominent mound directly across another important mound or an important earthwork point such as an opening or corner of the formation. On the distant horizon and directly above the aligned mound, observers would see the setting and rising of the stars involved.

Archaeological research the past few years has shown that many ancient Native American mound/earthwork sites were constructed in a way that facilitated a death ritual that would lead deceased souls to the stars.

One intriguing Hopewell earthwork that has been previously shown to have alignments to the sun at the solstices is in Randolph County near Winchester, Indiana. Archaeologists refer to it as the “Fudge Site” and is “the largest earthen structure recorded in Indiana.” The Fudge Site is a square-shaped earthwork enclosing over 31 acres. The square has sides of 1082 by 1263 feet.  The outer walls of the square were from 7 to 10 feet in height and 25 feet in width. There were two openings or “gateways” through the square’s walls, located on the eastern and western sides. The western gateway was itself a small, square, enclosure with an opening. Three radiocarbon samples were obtained in 2006 dating the earthwork to 110 BC-AD 220.

A 100-180 foot diameter oblong mound was situated in the center of the square. It was originally somewhere between 8-15 feet in height. A 1929 excavation found three burials and two caches of artifacts in the mound. A 1992 study showed that the sunrises and sunsets at the summer and winter solstices were incorporated into the square earthwork. These earlier-discovered alignments were the impetus for calculating if the stellar alignments involved in the Path of Souls ritual were also incorporated into the site’s construction.

To determine the horizon sightlines from the central mound and key points of the square, the precise GPS location and surrounding horizon altitudes were determined on Google Earth and from location information supplied in prior archaeological reports. “Starry Night Pro” was used to generate the movements and azimuth positions of the stars on December 21, AD 55. That particular year (AD 55) was utilized for the stellar calculations, as it was the center point of the radiocarbon ages obtained from the site. The “Cross Azimuth/Distance Calculator” was used to determine the exact horizon altitudes and azimuths of the stars investigated. Dr. Greg Little, author of The Illustrated Encyclopedia of Native American Indian Mounds & Earthworks, performed the calculations.

Results showed that Cygnus (specifically the star Deneb) set on the northwest horizon at 12:01 am at 323°. Viewed from atop the central mound, Cygnus would have set directly over the northwestern point of the square. At 6:22 pm, shortly after sunset, Orion would have been seen slightly elevated in the sky at 103°. As viewed from atop the central mound, Orion would have been seen directly above the gateway opening on the eastern side of the square. Orion would then have been perceived to move over the site and toward the west. The slightly southwestern setting of Orion on the horizon (specifically Orion’s Nebula), took place at 5:21 am, not long before dawn, on an azimuth of 262°. From the northeast point of the square, the setting of Orion would be seen directly over the odd-shaped gateway on the western side of the square.

The Fudge Site was clearly a mortuary site, perhaps with Adena-era elements (central mound) incorporated in a later Hopewell earthwork. The site clearly was constructed with the star alignments required in the Path of Souls’ ritual.