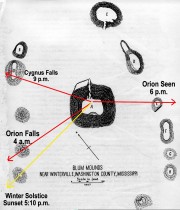 Winterville, Mississippi, March 7, 2016 (Newswire.com) - One of the greatest mysteries of the ancient mound building culture of America is why mounds were arranged in deliberate geometic configurations. Recently it has been shown that many sites were constructed in precise configurations to permit rituals that assisted the souls of the deceased to make a transition to the sky. This was the most important ceremony in this ancient culture and the beliefs associated with it extend back several thousand years. The ideas of this death journey are generally termed The Path of Souls.

The core ideas in the Path of Souls’ death journey are well established and accepted by mainstream archaeology (Little, 2014). It was believed by many Mound Builder tribes that the soul, termed the “free-soul,” made a journey to the stars after death. The journey could only be taken at a time when the constellation of Scorpius was not visible. This was because Scorpius was believed to be the ruler of the underworld and would snatch the soul. Thus, the journey was typically made at a time in the winter when the Scorpius Constellation was below the horizon. At many mound complex sites, the best time was at the Winter Solstice, when all of the key elements aligned. (This is partly why many mound cultures stored the bundled bones of the deceased.)

British author Andrew Collins was the first to assert the importance of Cygnus to many ancient cultures.

In brief, at dusk, the soul journeyed to the west where it came to a body of water. It then waited till early morning when Orion’s Nebula (Messier-42) was about to descend below the horizon. Orion’s Nebula is the fuzzy spot below the three belt stars of Orion. At that moment the soul made a leap toward the nebula. It was thought to be a slit in the sky, a portal (called an “ogee”) that allowed the soul to pass safely through the underworld during the day. The next night, the soul started a journey along the Milky Way toward the north. The Milky Way was the Path of Souls and was thought to be a river of other souls making the same journey. On the path there were various tasks, but the soul eventually made it to a fork in the path. The fork was the Dark Rift of the Milky Way, where it splits into two sides. At this split, the soul encountered a judge or mediator represented by a large raptor bird. The Constellation of Cygnus was the bird. If the soul passed the tests, the soul was allowed to make a final journey out of the sky dome through a portal believed to be the star Deneb, the brightest star of Cygnus. British author Andrew Collins was the first to assert the importance of Cygnus to many ancient cultures.

The Path of Souls idea is primarily viewed by archaeology as a Mississippian Era ideology. The Mississippian cultures (A.D. 800-1600) erected far larger mounds than did the Hopewell and most of the iconography related to the path of souls has been found on Mississippian artifacts. The stellar alignments used by these ancient people were made from one mound across another to the horizon where star movements could be observed in a direct line.

The Winterville site is a Mississippian Era mound complex that flourished in A.D. 1200. It had at least 15 mounds when it was surveyed by C.B. Moore in 1907. (See map.) Fourteen mounds were arranged in an oblong shape around a huge central mound fashioned into a truncated pyramid some 55-feet in height. Open plaza areas surrounded the central mound.

In 1987 several solar alignments were checked by archaeologists at Winterville. They found a definitive alignment from the central mound across another platform mound that indicated the spot where the sun set on the Winter Solstice in 1200 A.D. (Sherrod & Rolingson, 1987). Utilizing the computer program Starry Night Pro, the key stellar alignments in the Path of Souls concept were checked for the Winterville site on the Winter Solstice in A.D. 1200. It was assumed that all key alignments to stars would be from the central mound.

The first item checked was the visibility of the Scorpius Constellation on the Winter Solstice night. Results showed that Scorpius was below the horizon the entire night rising only after dawn when it could not be seen.

In summary, as with the previously examined Hopewell sites, all of the necessary elements for the Path of Souls idea were present at ancient Winterville. It is likely that similar alignments will be found at many Mississippian sites and more Hopewell sites, but one unanswered question remains. Where did the idea originate?

British author Andrew Collins raised the question about the importance of Cygnus around 2008. He found that Deneb, the brightest star of Cygnus, was the North Star some 18,000 years ago and believes that it may have gained its significance at that time.

Differences Between Hopewell and Mississippian Alignments: Hopewell sites where the Path of Souls’ stellar alignments are incorporated into earthworks appear to be widely spaced formations connected by graded, earthen walled pathways. For example, at Portsmouth, Ohio, the pathways ran over 14 miles connecting three distinctive sites. On the other hand, Mississippian mound complexes tend to be dominated by large platform mounds with associated plaza areas with other mounds surrounding the plazas. However, many Mississippian mound complexes were built as fortresses with high palisade walls with bastions placed at regular intervals. Sometime toward the end of the Adena/Hopewell periods (circa A.D. 100-500) it appears that war became more frequent and a centralization of power and control occurred within various tribes and clans. This resulted in the construction of some Hilltop Forts as well as the development of walled Mississippian villages. In essence, it is likely that sites like Portsmouth, with their widely scattered and unprotected earthworks were seen as too exposed and dangerous to tribal leaders. Thus, the Path of Souls ritual, which is thought to have been used by tribal leaders as a means of controlling the populace, was performed within the confines of protected areas in Mississippian times.